Les Trois Vallees - the Three Valleys, incorporating Courchevel, MeribelMottaret, Val Thorens, Les Menuires, as well as villages such as La Tania and Saint Martin de Belleville, describes itself as 'the biggest ski ares in the world', and some would say the it is the best. Ranging from sophisticated Courchevel to the, by direct comparison, more functional, cheaper and cheerful Les Menuires or the picturesque Brides les Bains and St Martin there are 615 km of prepared pistes, skiing to an elevation of 3200m, a complement of over 200 lifts, well groomed and attended conditions, inspiring scenery, and basically an unrivalled choice of well set out lifts to satisfy just even the most discerning piste basher. With a greater area of local terrain and something for everyone - from good, long gently lolling greens to chutes and couloirs, Courchevel is many skiers preferred choice, if money is not too much of an object, some prefer Meribel (1450m) for its greater choice of slightly more challenging runs. It is more a traditional, more compact, ensemble though linked to Meribel Mottaret (1700m) above, while purpose built Val Thorens (2300m) is the highest resort in Europe with two glaciers, and as such promises the best snow around. Les Menuires (1850m) wins few plaudits for its architecture, but it is cheaper, high and has plenty of ski in accomodation and good slopes. Courchevel is the more glamorous, with four main villages prefixing that name to their altitude. Courchevel 1850 is the oldest, dating back to 1946 originally, and biggest and offers most by way of skiing - apres ski and shopping amenities. Snowrafting and ice climbing are just two of the alternative wintersports available here. The quieter Courchevel 1550 nestles a ski run or gondola ride below and is better suited to those for whom the budget needs regular scrutiny. Le Praz, or Courchevel 1350, is more of the authentic Savoyard village and links directly into the 1850 lifts. While Courchevel 1850 boasts a good complement of better, more expensive hotels and it has immediate access to a wide range of uplift and slopes on the doorstep, Courchevel 1650 is much more in the purpose built mould and offers a wide choice of mid market chalets and apartments, but is less well linked to 1850 in terms of skiing on the upper runs, and has good cruising rgreens and blues almost all the way up its immediate lift service. Courchevel 1550 is quieter and though just 300m lower can feel quite isolated, with fewer facilities, but better prices. Of the two Meribel is sunnier, so Courchevel often enjoys the better snow conditions. Overall there's such a wide range of options, that it need not necessarily be the expensive destination so frequently quoted, nor does a sensible budget have to mean life in a homogenous apartment, especially if the snow is good right down to lower levels where the villages can offer more 3 valleys skiing miles, more character, for less spending. 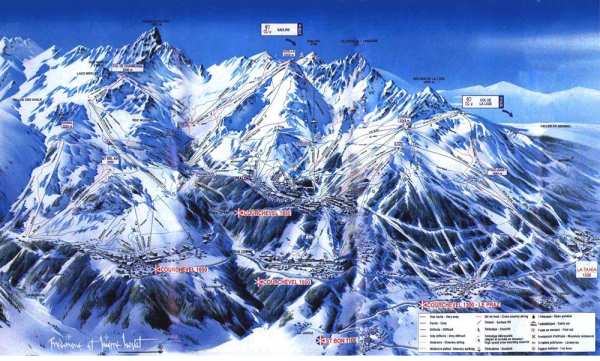