Picturesque La Clusaz has largely stayed true to its origins as an easily accessed French ski resort which dates back to the early 1930s, despite growing to a reasonable size now and becoming increasingly popular with snow sports visitors from the rest of Europe. It is now quite a well spread out town with a smaller satellite of Les Etages at the base of the L'Etale and Aigulle cableways. Freestylers, speed skiers, and cross country skiers (it has some 75km of scenic tracks in the immediate area, including 20km or so on the Beauregard plateau) are among the regular clientele. The ski area is well suited to everyone from starters to good intermediates and embraces five linked areas - the Balme sector (2490m) , Massif de la Croix FryCol de Merdassier (1480-1500m), Massif de L'Etale (2000m) and the Massif d L'Aiguille (2400m), and the Beauregard (1690m),so it is not especially high and can suffer accordingly in a poor season or when it beomes milder on the lower runs, however many of the runs are West and North West facing and do stand up well even in the spring sunshine. There is a good choice of skiing for less able skiers on the higher runs anyway.

The main resort offers around 40 hotels and pensions, and a good complement of chalet and self catering apartment accomodation. 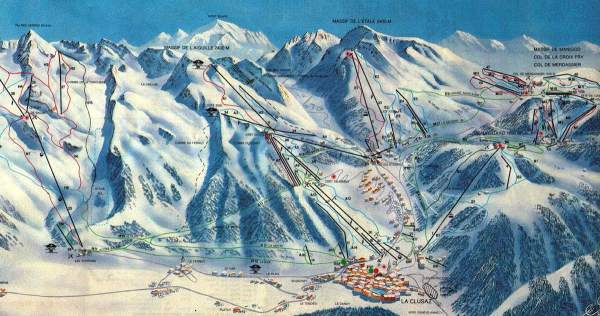