In total what is billed as La Plagne is actually ten different linked centres, six at higher elevation and four lower satellites, which, with over 210kms of skiing rising from Montchavin or Champagny at 1250m right up to the Glacier de Bellecote at 3250m. With so many links the network and transport system must be good and La Plagne generally delivers. If L'Espace Killy scores with the better skiers then La Plagne is the intermediate's equivalent and there is scope to cover large areas of terrain on a regular undemanding basis, predominately on the comprehensive choice of blue runs which comprise more than half of the complement of 117 runs. Plagne Centre (1970m) and Plan Bellecote (1930m) are the main hubs, with their own satellites some of which are not attractive; others are typically anonymous large blocks, while further up there the villages tend to echo a more traditional feel. Belle Plagne (2050m) is one such centre, albeit a modern interpretaion of the Savoyard theme which is linked to Plagne Bellecote by a gondola which runs until 1 am. As its name suggests Plagne Soleil is set in a sunny central bowl with good access to the lift network linked to both Belle Plagne. The villages of Montchavin (1250m) , Les Coches (1450m) and Champagny en Vanoise (1250m) are all lower, with Champagny linked to the other side of La Grand Rochette and the Roche de Mio. Champagny nestles in a more secluded wooded setting but has direct feeds back into the Belle Plagne and Plagne Centre lift networks, with the most efficient access link perhaps being from the top gondola station over Les Verdons.

It is fairly well equipped with shops, bars, cafes and restaurants, and Plagne Village, too is a more charming nucleus of smaller apartments and chalets, while Plagne Centre is overlooked by Aime La Plagne and both offer the more soulless type of functional apartment complexes. 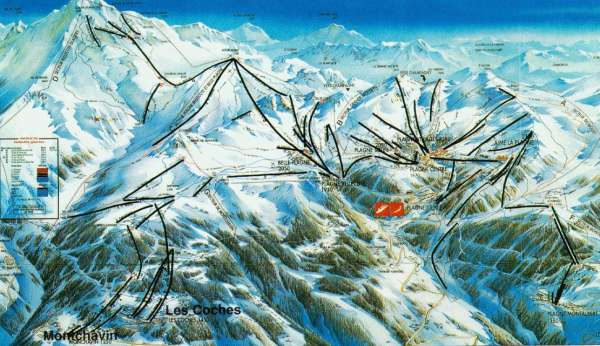