Les Trois Vallees - the Three Valleys, incorporating Courchevel, Meribel/Mottaret, Val Thorens, Les Menuires, as well as villages such as La Tania and Saint Martin de Belleville, describes itself as 'the biggest ski ares in the world', and some would say the it is the best. Ranging from sophisticated Courchevel to the, by direct comparison, more functional, cheaper and cheerful Les Menuires or the picturesque Brides les Bains and St Martin there are 615 km of prepared pistes, skiing to an elevation3200m, a coplement of over 200 lifts, well groomed and attended conditions, inspiring scenery, and basically an unrivalled choice of well set out lifts to satisfy just even the most discerning piste basher. With a greater area of local terrain and something for everyone - from good, long gently lolling greens to chutes and couloirs, Courchevel is many skiers preferred choice, if money is not too much of an object.Some prefer Meribel (1450m) for its greater choice of slightly more challenging runs. It is more a traditional, more compact, ensemble though linked to Meribel Mottaret (1700m) above, while purpose built Val Thorens (2300m) is the highest resort in Europe with two glaciers, and as such promises the best snow around. Les Menuires (1850m) wins few plaudits for its architecture, but it is cheaper, high and has plenty of ski in accomodation and good slopes. Les Menuires is almost universally slated for its appearance, heavy on the use of concrete high rise apartment complexes, but this provides plenty of good comfortable accommodation, and the payback is in great access to the slopes, and most accommodation centres are by the lifts, and are really ski to the door. The adjacent, smaller Les Bruyereres development is more low rise, provides most services and is quieter than the main centre, but still provides a good range of amenities. It has two main ski areas - the La Masse circuit to the west of the village, which has some of the more advanced skiing in the area, but also has a network of blues to progress down, and the runs here are often quiet since most follow the eastward magnetism of Meribel and the other valleys, while on the east face of the valley there is a dense sprawl of reds and blues to be skied until it integrates with the Val Thorens lifts above. Snow quality is not the best in the 3 valleys, but there is extensive snowmaking on the east flank, between the Combes, Stade and the Reberty lifts. 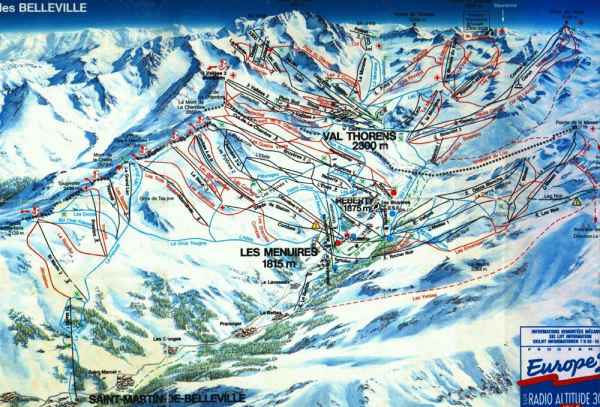 Tweet
Published in France
More in this category: « Les Gets Megeve »
You are here:
Home
>
Resorts
>
France
>
Les Menuires