Although skiing seems only a small part of everything that's happening at St Moritz that can only be because St Moritz is such an unusual resort. At any other destination the first thing you would notice is the huge skiable terrain, one of the world's largest, great vertical drops, snow-sure altitudes (with a glacier and extensive snow making for added security) and a nice modern lift system. The Engadin ski pass, which takes in St Moritz's ski areas and several others, covers 350km of terrain of which about 80km are 'local' to St Moritz and its three separate ski areas of Corviglia, Corvatsch above neighbouring Silvaplana and the Diavolezza Glacier area. The resort is not well known as a beginner's choice: the steep mountain sides above it mean that nursery slopes are limited and 'easy runs' make up only 10 per-cent of the total. One of the best options is to take the Corviglia funicular to the top of the easiest runs back down to the town. On the other hand this is a great choice for intermediates who in contrast have 70 per-cent of the area coloured in red for their enjoyment on mostly wide, immaculately groomed slopes. Highlights include the Piz Nair run down for 8km to Celerina. Experts too will find plenty to entertain them, particularly if they venture off-piste with a guide. The remaining 20 per-cent of the runs are blacks, but they tend to be spread around the various ski areas rather than there being an 'experts mountain' such as there is at Aspen. Highlights on-piste include the Piz Lagalb slopes, the Corvatsch glacier, the Morteratsch run from Diavolezza and the Hahnensee black back down to St Moritz Bad.

There are many Restauarants and Bars however eating out can be expensive. There are also some excellent Night clubs for example Hemingways and the Kings Social House. You can try Bobby's Pub which is an English style Hostellerie, La Scalleterie - A Cosywine bar/deli or Roo Bar which has a fantastic terrace and House DJ's popular with locals and season workers 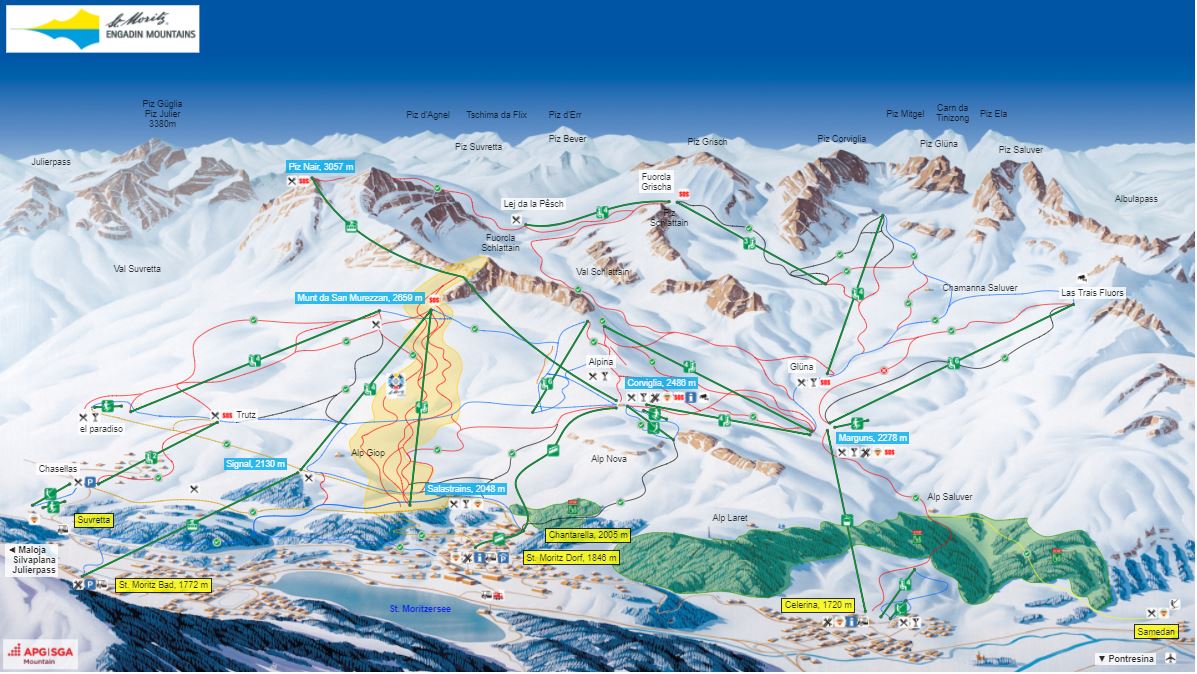